Smartphones are revolutionary devices that have transformed modern life. With a smartphone, you can check your email, post status updates, and browse the Internet from almost anywhere in the world. Apps can take advantage of a smartphone’s camera and GPS to help you navigate the world and share your experiences.

The broad range of features that smartphones can offer have made these devices essential for both work and fun in today’s world. Upcoming smartphone models, however, will have even more functionality that will enable you to get more out of your life. Since technology changes at a rapid pace, it is critical for people to keep up with new technologies before they become widely adopted. Taking the time to learn about some of the top smartphones of 2017 will give you an edge in the years ahead.

You may recognize Google for its Android operating system that is used on many modern smartphones. However, Android phones have always been manufactured by other companies, such as Samsung and LG. For the first time, the Google Pixel is a smartphone that is manufactured by Google itself.

The Pixel is designed to be simple to use while still offering the processing power of a premium smartphone. The Pixel features a fast Snapdragon 821 processor, 4 gigabytes of RAM, and an expandable 128 gigabytes of storage space. The OLED screen offers excellent color and contrast, and it is protected with heated glass that is difficult to break. The combination of speed and screen quality makes the Pixel highly responsive for touch interaction.

One major advantage of the Pixel is that Google has been able to optimize this phone in many unique ways because the company controls both the hardware and operating system on the device. For example, the battery life of the Pixel has been optimized to the point where it lasts longer than almost any of the leading phones on the market.

Although the Pixel is designed to be simple, its powerful features make it relatively expensive. The Pixel starts at $649 for the basic model, and it gets as high as $869 for the 128-gigabyte model. Although the Pixel looks similar to the iPhone, it has a much more basic appearance than some of the other top phones on the market. Smartphone users who prefer flashy phones that can be used like jewelry may want to look elsewhere.

The Google Pixel has been awarded a 4.5-star rating from both TechRadar and CNET, and it is available with all major carriers. Overall, the Pixel is the perfect combination of power and simplicity for casual smartphone users who never want to be slowed down.

If you are looking for a slim and powerful Android smartphone, the Moto Z2 Play may be the right device for you.

The Motorola Moto Z2 Play comes unlocked, and it supports mods right out of the box. You can, therefore, install almost anything on this phone without encountering significant restrictions from the operating system or manufacturer. Users who are unhappy with many of the leading phones because of their inability to support custom or downloaded mods may want to give this phone thorough consideration.

To make the Motorola Moto Z2 Play even more customizable, the manufacturer offers a wide range of accessories that can change the phone’s functionality. Additional batteries, speakers, a charging pad, and even a projector can be purchased separately and used at any time.

The LG G6 is one of the only phones ever made that is completely waterproof. In fact, LG has designed the G6 so that it can be completely submerged in water without experiencing any problems. Smartphone users with a history of breaking their phones by dropping them in a puddle or a toilet may want to consider the G6 for its waterproof design.

One of the downsides of the G6 being completely waterproof is that the battery cannot be removed, so this could lead to problems in the future if you plan to keep your phone for an extended period. However, LG compensated for the inability to swap out the battery by increasing the battery life from 12.5 hours on the older G5 to 13.5 hours for the new G6. The G6 can even charge wirelessly.

Another unique feature of the LG G6 is that it has two cameras on the back, and this enables exceptional stabilization while still yielding a highly detailed image. The front camera also takes excellent images that can be up to 5 megapixels.

LG has priced the G6 between $500 and $729. The LG G6 has been awarded a 4-star rating by both CNET and TechRadar. Overall, the LG G6 is one of the best options available if you are looking for a premium Android phone.

The Apple iPhone 7 has been on the market since September 2016, but it is still worthy of consideration because it remains one of the best smartphones available.

With a quad-core processor that can reach speeds as fast as 2.34 gigahertz, the iPhone 7 is one of the fastest phones available on the market. After experiencing complaints with some of the older iPhone models that had limited storage capacity, Apple updated the iPhone 7 with up to 256 gigabytes of storage space. The storage space of the basic iPhone 7 model has also been increased to 32 gigabytes.

One of the most unique features of the iPhone 7 is its 12-megapixel camera that offers real optical zoom. Unlike ordinary smartphones that can only zoom digitally by cropping the final image, the iPhone 7 contains a mechanism to physically retract the camera lens for up to 2x optical zoom.

The Samsung Galaxy brand has been Android’s answer to the iPhone for almost a decade. However, Samsung has still managed to find ways to offer further improvements for the Galaxy S8.

The S8 offers a 12-megapixel camera and a waterproof design. Combined with an 8-megapixel front camera, the S8 can compete well with the iPhone. Additionally, the screen of the S8 goes all the way to the edges of the device so that no space is wasted. The narrower design of the S8 also makes it easy to hold and put in your pocket.

The downside of the S8 is that its glossy and rounded design can make it easy to drop. Some users are also unhappy with the fingerprint reader being positioned on the back of the S8 because this makes it difficult to use when the phone is lying flat on a desk.

The S8 has been awarded a 4.5-star rating by CNET and PC Magazine. All major carriers support the S8. Overall, the S8 is one of the best smartphone options available for Android users. 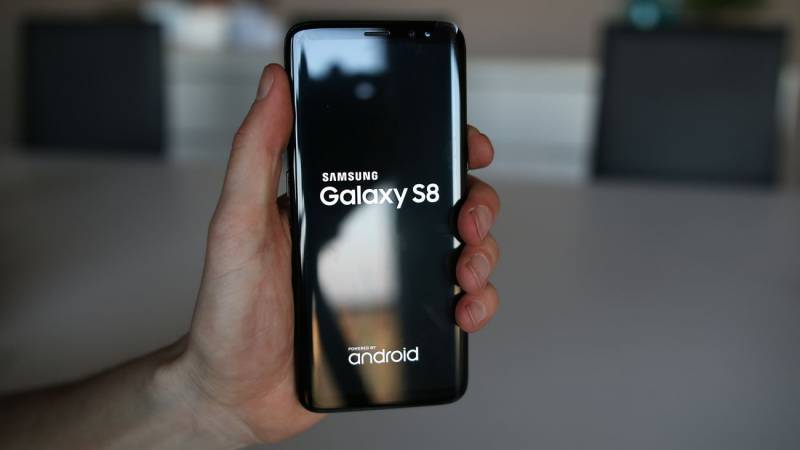