The Best Hatchbacks Of 2017

A number of automakers have decided to include hatchback models for their 2017 lineup. Many of these vehicles showcase modifications to hatchback models in previous years. Others will reach consumers as entirely new models.

Hatchbacks usually have a sleek, aerodynamic design. They’re considered to be the sportier version of their sedan counterparts. More contoured than a station wagon, they’re typically shorter than a sedan but offer more cargo space to haul items. While in the past hatchbacks might not have been the most visually pleasing vehicle, the demand for them has caused automakers to modernize them in order to keep up with the market.

Consider some of the best hatchbacks available in the US automotive marketplace today, and see which one suits your style.

Although highly compact, the 2017 Chevrolet Cruze hatchback model displays a sporty exterior. The rounded, highly contoured lines of the Cruze conceal an impressive storage space. With the second row of seats flattened, the new Cruze offers up 47.2 cubic feet of cargo storage space. If you’re seeking a car with utility and an impressive appearance, the storage space combined with the sleek exterior checks both of those boxes.

Pros and Cons: As a new model, the Cruze hatchback does not possess an extensive track record. However, its attractive starting price and engaging design will certainly appeal to many customers this year.

Although Honda offered a hatchback version of its popular Civic model in the United States at one time, the company has not offered a similar trim package here for several years. In 2017, the Civic Hatchback returns in a highly modified, re-designed form. Its arching roof and streamlined proportions give even the sportiest cars a run for their money.

The new Honda Civic Hatchback boasts several available trim versions: LX, Sport, EX, EX-L Navi, and Sport Touring. These trims range in suggested manufacturer retail price from $19,700 to $28,300 respectively. Customers seeking a hatchback that is almost completely customizable will enjoy a variety of options for their Civic. However, prices rise quickly with the inclusion of additional available options and features. The basic LX gets 174 horsepower and comes with a 6-speed transmission with a fuel-efficient 1.5 L turbocharged engine.

Pros and Cons: The long-awaited return of a Honda Civic hatchback this year will certainly please many drivers. If you’re budget conscious, you will need to exercise restraint in selecting available options, since choosing extra features ups the final price tag.

Toyota has also entered the growing hatchback market, offering the Corolla iM this year in two alluring hatchback trims: the 6-speed manual transmission model starting at an MRSP of $18,750, and the slightly higher-priced CVT with an automatic 6-speed transmission beginning at $19,490. Both vehicles depend upon a 1.8 L 4-cylinder engine. Some of the new model’s features will remind you of an earlier Toyota model, the Scion.

The Corolla iM can seat up to five people in the cabin comfortably. Its sculpted exterior is almost more reminiscent of a crossover than a true hatchback. Available in six different paint colors, the hatchback versions give you the option of selecting a number of available additional high-tech safety warning technologies. Additionally, you can choose to install an OnStar system to call for help automatically during an emergency. Toyota’s design team has created a truly beautiful vehicle.

Pros and Cons: If you appreciated the Scion, you will also like the new 2017 Corolla iM. Its safety features will appeal to many drivers. If you’re looking for a compact hatchback, however, this might not be the car for you.

Ford offers its exciting 2017 Focus in several trim models, including two separate four-door hatchback versions: the SE Hatchback and the SEL Hatchback. Both trims are spacious and lean heavily on an aerodynamic, sporty style.

Customers can expect to get their car with a 160 horsepower 6-speed automatic transmission and front wheel drive. As the Focus has been a fan favorite in the past, the 2017 version is likely to be very popular this year as well.

The SE starts at an initial manufacturer’s recommended price of only $19,765, making it quite competitive. The SEL begins slightly higher, at a base MSRP of $21,675. They both come with a manual overdrive transmission feature. Select either of these trendy vehicles in ten different attractive paint colors and three available interior trim packages to custom tailor your vehicle. The availability of an array of options allows individual drivers to pick and choose the most useful features, permitting a greater level of customization.

Pros and Cons: Its versatility and great price help make the Focus a popular hatchback selection. Ford has acquired an impressive reputation as a manufacturer of durable vehicles that look and feel great.

Hyundai extensively redesigned its popular Elantra model to reintroduce its classy hatchback to the United States in 2017. The long, sleek lines of this vehicle convey a sporty element. The automaker’s design team worked to create a roomy, plush interior capable of supporting an array of high tech infotainment and navigational tools.

Available in eight paint colors and two interior trims, the elegant Elantra can seat up to five people comfortably. Customers select between five different exterior trim packages ranging in price from an MSRP of $17,150 for the SE, to $22,350 for the Limited. Most models offer a 2.0L 4-cylinder engine capable of getting 147 horsepower.

Pros and Cons: If you’re looking for a sporty, compact hatchback, the Elantra is a top contender. With its customization abilities and low base MSRP, it’s been a consumer favorite for years. The only drawback is that some critics have observed that it does not command as much horsepower as befitting its sporty exterior.

Are you looking for a luxury hatchback model? Then the hatchback trim packages for some of the 2017 BMW Series 3 may appeal to you! Specifically, the sleek 2017 330i xDrive Gran Turismo has a hatchback profile and a beginning manufacturer’s recommended retail price of $43,950.

With an 8-speed transmission and a horsepower of 320, this vehicle offers precision engineering and competitive performance features. BMW has gained an international reputation as a skilled designer of luxury vehicles.

Pros and Cons: This elegant luxury hatchback carries a prestigious logo! It will appeal to many customers as an alternative to an executive sedan.

All of these exciting 2017 models offer positive and negative features. Which one you choose is completely based on your wants and needs. 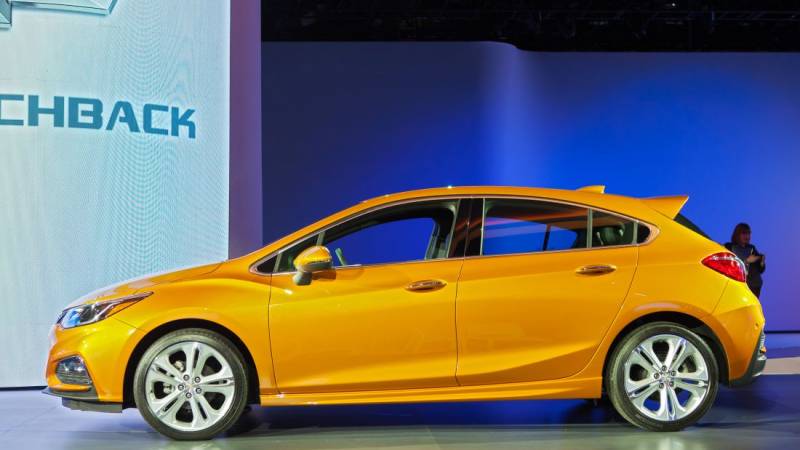