Spun off in 2015, Genesis Motors is a division of Hyundai. Genesis was spun off from its parent company in order to concentrate on higher end vehicles that likely wouldn’t appeal to Hyundai’s more budget based consumer image.

Genesis has existed in one form or another since 2004, when Hyundai released the first Hyundai Genesis concept. The original Hyundai Genesis, only thirteen years old this year, was a frontrunner luxury car for it’s time. Though this vehicle wasn’t actually released until 2008, when it rolled off assembly lines it came with a warranty for 500,000 miles — the highest on the market at the time.

Reviews for the Genesis models over time have been largely positive, speaking of Hyundai’s endearing reliability. Additionally, consumers have been charmed by the Genesis’s gorgeous curves, fine tuned exterior and interior. The Genesis model is a newer luxury vehicle that deserves all of the admiration it receives. Let’s look at the models more closely.

The Genesis G80 is the introductory level model for the Genesis line. It’s well priced for the 2017 year with the lowest priced package running around $42,000 USD retail. Those shopping for a deal will likely be disappointed with the Genesis line as these luxury items rarely have sales or come cheaper than the manufacturer’s suggested retail price. If trading in an older model you may get some form of loyalty cash, but that’s about it.

G80’s 2017 technology is only a half step away from fully automated cars. This pretty little sedan has sensors everywhere. The front sensors help to keep a safe distance between vehicles and obstacles in front of the vehicle. Sensors on the side check for lane drifting, blind spot invisibility and other obstacles that may be an issue. Rear cameras are standard, helping drivers avoid back up incidents altogether. This anti-collision support helps drivers ascertain risks while driving on deserted roads or busy highways.

Genesis has loaded even the most basic model of the G80 with dozens of options able to be upgraded. Rather than the more common Bose sound system most luxury vehicles have, Genesis has taken it to a whole other level with Lexicon. Though Lexicon does not come standard on the most basic model, it is able to be upgraded and does come standard on other versions of the G80.

Perhaps the one drawback to this handsome little car is what’s under the hood, and what it’ll cost you. With only 420 horsepower, the G80 is not a sleek performance coupe like so many other luxury vehicles. Rather, it’s made for families looking for a higher quality vehicle.

All things considered, the G80 is still a solid entry level luxury vehicle. For the entry level price, the G80 gives a lot of bang for its buck and offers a long term reliable vehicle willing to perform under most common requirements.

Like with the G80 we see an upgrade to driver assistance. If the G80 is half a step away from being a fully automated vehicle, the G90 is merely an eighth. With smart cruise control that automatically adjusts based on road conditions, Driver Alert Assistance, and sensors on every point of the car that could possibly need them, the G90 rarely needs more than a finger on the steering wheel.

Not that you’ll want only a single finger. The G90 is a pleasure to drive with molded steering wheels, soft leather interiors and a plethora of comfort driving options between all four option levels. Some vehicles are simply fun to drive, and the Genesis G90 is one of them.

Again, it’s under the hood that we find drawbacks to the Genesis brand. At only 17 miles per gallon under city driving conditions, there are full sized trucks with better gas mileage for the 2017 model year. Unfortunately, this means that you’ll be hit in the pocketbook each time you’re at the pump — which will be fairly frequently. The Genesis G90’s tank only holds 22 gallons of gasoline at a time. While this is a standard sized tank, such high consumption means more fuel trips.

The Genesis G90 does pay for it’s gas consumption with plenty of power. Though it rates the same horsepower as it’s G80 cousin, the engine is capable of handling more torque and higher temperatures. It’s comparing quarter horses to thoroughbreds — it’s still horsepower, but one is so much stronger.

Well priced and well regarded, the G90 should certainly be under consideration for anyone looking a very nice performance sedan in this price range. For those more environmentally minded, it may be better to look for other options such as upcoming gas economy friendly concept vehicles.

Here we have the maybes, the possibilities and the future of the Genesis brand. With reported plans of two upcoming SUVs, a new luxury coupe and a new luxury sedan, Genesis is growing. However, they have only released details on the sedan and the coupe at the time of this writing. The announcement of the SUVs has taken place, but we only know that they intend to make them- nothing else.

The New York concept is Genesis’s new take on a high-class luxury sedan. With a projected 2020 initial release date, the New York concept has a long way to go before we see it on the pavement. Though currently planned to offer driver-less options, Genesis will have to take its time with those options as lawmakers and insurance governing bodies have not yet figured out laws regarding automated vehicles. Hopefully they will before the New York rolls off the assembly line.

The New York is scheduled to offer sedan style with coupe power as well as attempting to double as a rolling office on wheels with touch- and writing related Wi-Fi screens for all passengers, allowing instant transfers of data as necessary.

Vision G is Genesis’s take on a well-groomed coupe. Taking inspiration from such well-known names Aston Martin and Bentley, this coupe is less sport and more style. Projected for the same 2020 model year as the New York, Genesis’s first coupe is rather quiet about its ideas.

Beyond a few very shiny pictures and concept art, as well as a movement towards automated driving like the New York, the Vision G is being kept under wraps.

Both concept vehicles promise better fuel economy and a way to allow greater fuel consumption on demand for more power, or less at the push of a button. 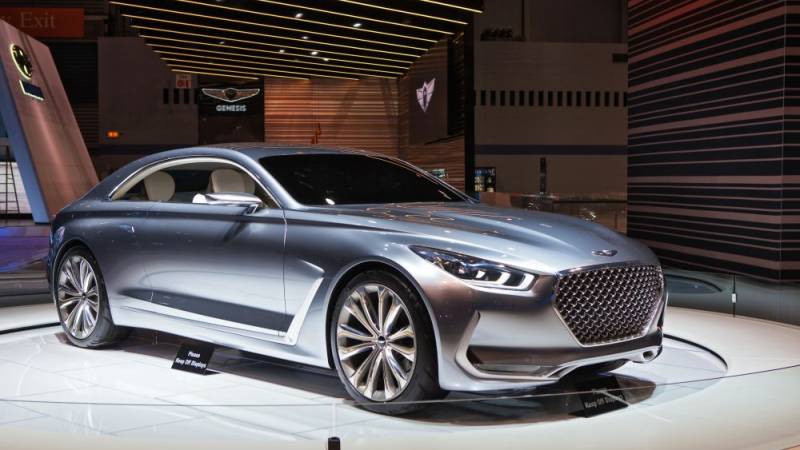