The Hyundai Santa Fe starts at $30,400 MSRP. It is 193″ long, 74″ wide, and 67″ high. It offers 13.5 cubic-feet of cargo space that expands to 80.0 cubic-feet when the second-row and the third-row seats are down. It has four-wheel independent suspension with front and rear stabilizer bars.

The 2016 Santa Fe has a quiet engine with great acceleration and a 5000 pound towing capacity. It offers a 290-horsepower, 3.3-liter, 24-valve, variable speed, DOHC, V-6 engine with a six-speed shiftable automatic transmission.

The safety features on the Santa Fe include stability and traction control, tire pressure monitoring, emergency braking assist, and a rearview camera.

Edmund’s praises the 2016 Hyundai Santa Fe for having power, comfort, and style at a lower price than its competitors. With the Santa Fe, Hyundai maintains its reputation for providing an upscale interior and lots of features at a value price.

However, it does have less cargo space and safety features than some of its competitors. Both the roomy Honda Pilot and the Toyota Highlander do seat eight, and the Chevrolet Traverse has more cargo space.

The stylish 2016 Hyundai Santa Fe offers quick acceleration and smooth shifting. It is stylish and loaded with features. It is lacking in the areas of cargo space and safety features.

The interior provides a luxury feel at Hyundai value-pricing. It has front bucket seats, a six-position power-adjustable driver’s seat, a four-position manually-adjustable passenger seat, and a 60-40 folding rear seat.

The Hyundai Tucson starts at $22,700 MSRP. It is 176″ long, 73″ wide, and 65″ high. It offers 102 cubic-feet of passenger space and 31 cubic-feet of cargo space which expands to 61.9 cubic-feet when the rear seat is folded down. It has front and rear disc brakes, four-wheel anti-lock braking system, and front strut and rear multi-link suspension with coil springs.

Car and Driver Magazine ranks the 2016 Hyundai Tucson fourth in compact SUV Crossovers. While its 175-horsepower engine is less than the engines in the Honda CR-V, the Mazda CX-5 2.5-liter, the Toyota RAV4, and the Ford Escape 1.6L EcoBoost. It beats all of them with 195 lb-ft of torque, which gives it great acceleration. Although less responsive than the Volkswagen and Audi DVR, the seven-speed dual-clutch automatic transmission beats the CVTs in other compact SUV Crossovers.

It has great acceleration, a luxury feel, great safety ratings, and Hyundai’s reputation for value with only an occasional slight issue with stuttering acceleration on starts and unresponsive steering. 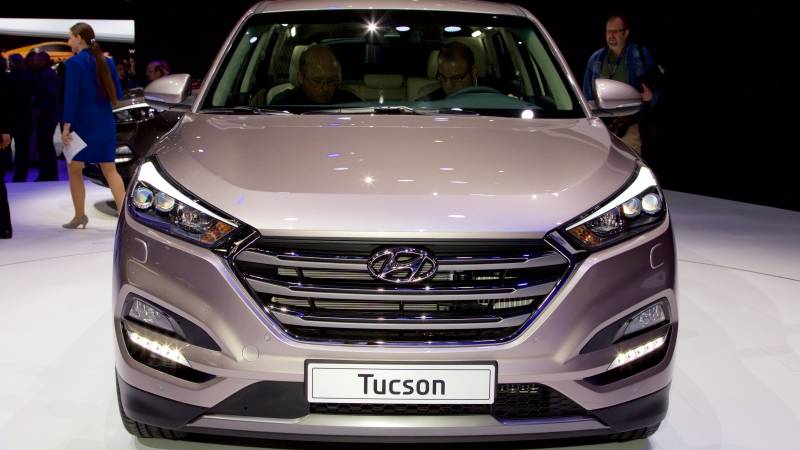 The 2016 Hyundai Santa Fe Sport comes in four trims: the 2.4L, the 2.4L AWD, the 2.4L Turbo, and the 2.4L Turbo AWD. It has a spacious, quiet interior with lots of features. It includes front bucket seats, a height-adjustable driver seat with manually-adjustable lumbar support, a 50/50 split-folding rear seat, and rear ventilation ducts.

The safety features on the 2016 Santa Fe Sport include stability and traction control, emergency braking assist, and tire pressure monitoring. It received the top NHTSA overall rating of five-stars. It also was awarded the same rating for total frontal-impact safety and total side-impact safety. For its moderate-overlap frontal-offset crash test results and its side-impact, roof-strength and seat/head restraint design test results, it received the top rating of good from the IIHS.

While it’s price is close to SUV Crossovers in the compact class, like the Toyota RAV4 and the Honda CR-V, it is a roomier, mid-size SUV. Its fuel efficiency is also below average for its class.

The 2016 Hyundai Santa Fe Sport has a roomy, luxury interior, a generous list of features, and great safety ratings, However the ride is stiff, rear visibility is bad, and the fuel efficiency is low. 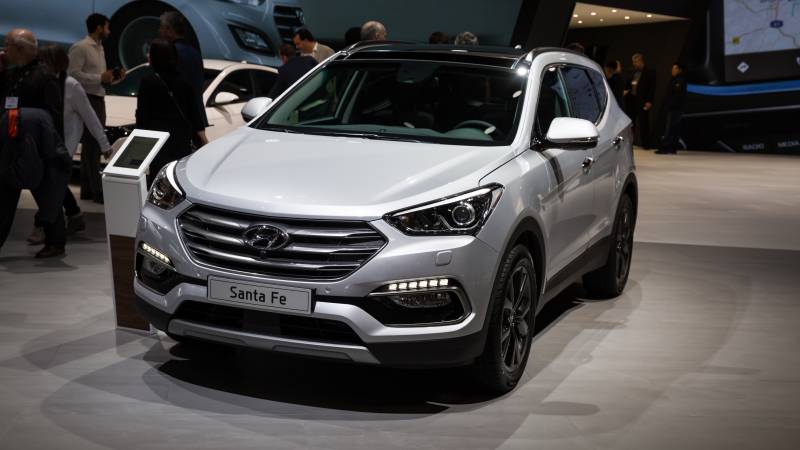 The Santa Fe, the Tucson, and the Santa Fe Sport all rank high in their class, have top safety ratings, and are built to provide good value and lots of features.