Inside the New Nissan Altima

The 2017 Nissan Altima is a popular mid-sized sedan that lays claim to good gas mileage and unique safety features. The model also offers what are arguably the best seats in affordable cars today.

Only Nissan has NASA-inspired zero-gravity seating. First introduced on the dressier, pricier Nissan Murano, these chairs have made their way to the much more affordable Altima. That’s good news for regular commuters and anyone else who spends a long time in their car every day. Truly supportive, the cushioning has been shown to prevent fatigue on long trips.

While the passenger volume in the Altima is a generous 101.9 cu.ft., you’ll find that others can beat that by one or more cubes. The Sonata boasts 106.1 cu.ft. Likewise, the Altima trunk is big, but you’ll find the Ford Fusion and Hyundai Sonata have a significantly bigger one. Even so, the Altima offers generous wiggle room.

Base Features and Trims

The base edition, known simply as the 2.5, really isn’t a good choice for contemporary drivers. You don’t get any dash tech and the $400 savings is hardly worth it. The 2.5S edition is more like it. You get Bluetooth, a color audio display and Siri Eyes Free, which works with iPhones only. A rearview camera is standard. As a nice touch, Nissan illuminates the USB port. The higher editions can enjoy a seven-inch touchscreen with navigation and mobile apps.

What’s missing from the system is Android Auto and Apple CarPlay, systems that are standard on the Chevy Malibu and some other competitors. You’ll also find that the Malibu beats the Altima in terms of WiFi availability.

The SR is the sport-tuned Altima, offered as either a 2.5 or 3.5 edition. Apparently it now accounts for 30 percent of all Altima sales. You really don’t get many more amenities than the S, but you get a more athletic car. Curb appeal and interior appointments are spiced up by extra trim elements. If you aren’t interested in a sportier vehicle, you can get a very good value from the SV edition. This includes:

If you want a touch of class, the 2.5SL or the 3.5SL are the answer. The 2.5SL front seats, steering wheel, and side mirrors are power-heated. Leather covers the seats. Bose premium audio supplies nine speakers. The 3.5SL adds more luxuries, more dash tech, and more safety tech:

The Malibu has more airbags. The Camry has whiplash lessening seats. The Accord has Honda LaneWatch, a camera in the passenger side mirror. Furthermore, parents may not like the fact that the Altima’s LATCH attachments earned a marginal score while other sedans are earning acceptable or good ratings for their carseat attachments.

Yet the Nissan Altima really holds its own. For one thing, it has the coveted five-star rating from the National Highway Traffic Safety Administration. That makes it quite competitive. It also can claim better frontal crash scores than the Camry can. Named a Top Safety Pick Plus by the Insurance Institute for Highway Safety, the sedan has been recognized for its advanced crash avoidance features.

When it comes to pricing, Nissan systems are often more affordable, thus keeping it within reach of more buyers. Only Nissan is offering a predictive capability on its forward collision warning. This looks several car lengths ahead. Nissan has switched to using a radar system for its blind spot warning. This is believed to be a better system than a camera-based one. Crash avoidance systems include:

Nissan took the continuously variable transmission mainstream before many other brands took up the idea. It caught a lot of flak for the tricky way the CVT operated, but that was then and this is now. Few complain about the Altima’s CVT. While it’s not a traditional automatic, Nissan gets it to behave like one, helping drivers feel more confident. Most recently the automaker tweaked the system to block the whirring noise that the transmission makes.

If you prefer a regular automatic, the Hyundai Sonata has you covered. The Accord has a manual transmission as standard, making you pay extra for the CVT at the lower trim level.

Like so many in its class, the Altima offers a four-cylinder fuel-efficient base edition and a sportier V-6. There is no hybrid version to compete with the Chevy Malibu Hybrid or Toyota Camry Hybrid. Still, among gas-powered midsized sedans, the Altima claims best-in-class fuel economy. The smart four-cylinder powertrain generates enough horsepower to be on par with the Accord. Fuel economy rivals include the Hyundai Sonata and Chevy Malibu. Here’s a breakdown of the Altima against major competitors:

Since the Toyota Camry is the best seller in this category, the two are compared here. The initial difference between the 2.5 and LE does look significant at $570. However, that shrinks when you realize that, to match content, buyers must opt for the 2.5S. So that makes the initial difference $170. When it comes to luxury options, the top trim levels switch with the Camry costing less than the Altima. However, key safety equipment drives the Camry’s price back up to match or even surpass the Altima.

As you consider your options, the Nissan Altima will probably be on the list. The excellent gas mileage and good safety systems make it a logical choice for a family or a busy commuter. It may not be a dream to drive, but it is definitely a good value for the money. 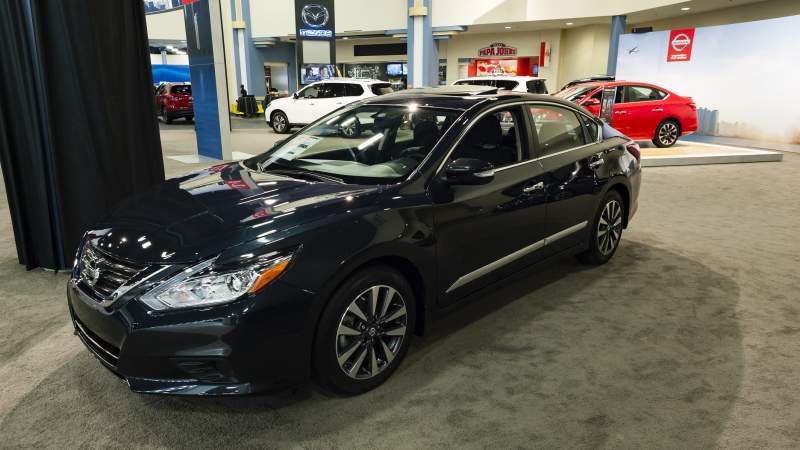