Inside the New Chrysler Pacifica

The 2017 Chrysler Pacifica is an all-new minivan that replaces the manufacturer’s previous offering in this class, the Town and Country. It earns high marks for convenient, family-friendly features, powerful engine and refined handling, and impeccable safety ratings. The 2017 Pacifica has a starting MSRP of $28,595, with price increases for higher trim packages.

The Pacifica comes standard at all trim levels with 287-horsepower, 3.6-liter V6 engine, a nine-speed automatic transmission, and front-wheel drive. This engine provides powerful speed, with independent tests by Car and Driver magazine reporting a 7.3-second zero-to-60-mph time, faster than rivals like the Honda Odyssey and Toyota Sienna.

But it’s not all about power. The Pacifica is also a great value, with class-leading fuel economy of an EPA-estimated 18/28 city/highway miles per gallon. Fans of the Pacific praise the car’s stable yet refined handling and comfortable, quiet ride.

Drivers who are concerned about fuel economy may want to opt for the Pacifica hybrid when it’s released later this year. This model runs on a V6 engine and two electric motors, with a capacity of up to 30 miles on battery power alone and 80 miles per gallon combined city/highway driving.

With seating for up to eight passengers, the Pacifica is the perfect vehicle to choose if you have a crowd to transport. The convenient Stow-and-Go seats fold flat into compartments under the floor to maximize interior volume, resulting in a best-in-class 197.3 cubic feet of cargo space. And when you need the second and third rows, you can use those compartments to store small items. The tilting second-row seats also allow easy access to the third row, which is ideal for parents with child safety seats in the second row. And not only is there plenty of space for all your stuff, it’s easy to load your Pacifica with the optional hands-free power sliding doors and lift-gate.

In addition to space, drivers will also be impressed by the minivan’s generous array of luxury features. The base model of the 2017 Pacifica comes standard with power windows in both the first and second rows, manual climate control that allows you to independently adjust the heat and cool settings for the driver, passenger, and second row, a proximity key, and push-button start. Opting for higher trim levels ups the ante with available three-pane panoramic sunroof, windshield wipers that switch on automatically when rain begins to fall, and even a built-in vacuum with a 28-foot hose that makes it easier than ever to clean up those cookie crumbs on the rear seats.

It’s easy to stay in touch with Chrysler’s standard Uconnect infotainment system, which integrates a 5-inch touch screen, voice command recognition, Bluetooth and USB connectivity, six-speaker stereo, and a rearview camera. Fans of Chrysler note that this system is one of the best in the industry, boasting lighting-fast responses and a user-friendly graphic menu.

Higher trim levels add options that make it easy to keep the kids (and parents) informed and entertained on long road trips and dull commutes alike, including an 8.4-inch touch screen, satellite and HD Radio, navigation, two 10-inch rear-seat touch screens offer games like Connect 4 as well as DVD, Blu-Ray, and video games, either a 13-speaker Alpine stereo or a 20-speaker Harman Kardon stereo, a 115-volt outlet, and even an additional 7-inch screen between the gauges.

The 2017 Chrysler Pacific has earned Top Safety Pick+ designation from the Insurance Institute on Highway Safety, with the highest possible score in all five crash test categories.

The 2017 Pacifica comes in five separate trim levels, allowing it to appeal to a variety of drivers. The base model LX, with a starting MSRP of $28,595, includes the standard features already mentioned along with cloth bucket seats, active noise cancellation, 17-inch aluminum wheels, six speakers, and capless fuel fill.

Those who opt for the Touring Plus, with a starting MSRP of $37,895, will enjoy all of the above plus the exclusive UConnect Theater System, 13-speaker premium Alpine audio, power front passenger seat, power Stow and Go assist, heated second-row seats and steering wheel, power windows in the second row, distinctive bright roof rails, and an expanded 8.4-inch touchscreen.

The top of the line Pacifica, the Limited edition is fully loaded with all of the features of the Touring Plus as well as Nappa leather trim on all seats, ventilated seats in the first row, the Stow and Go vacuum, panoramic sunroof, navigation, power third-row seats, hands-free sliding doors and liftgate, LED accent lights and fog lamps, power exterior mirrors, and memory settings for both the power seats and mirrors. It has a starting MSRP of $42,495.

The 2017 Chrysler Pacifica is one of the most critically acclaimed vehicles in its class, ranked the best minivan of the model year by U.S. News and World Report, as both the Best Family Car and Best Value Overall by the Greater Atlanta Automotive Media Association, as the Family Car of Texas by the Texas Auto Writers Association. It was also on the list of Ward’s 10 Best Interiors for 2016. Although it beats the competition in almost every category, reviewers have found that some rivals have more comfortable second and third-row seats.

Chrysler takes credit for inventing the minivan in 1984, and the all-new Pacifica brings life to a class that has been in decline for more than a decade in favor of the ubiquitous crossover. Not only does it boast the power, space, and safety that often define the minivan category, it also has more than 100 available features–40 of which are offered for the first time in this class in the Pacifica. If you want a family vehicle that thinks beyond the SUV, think the all-new Chrysler Pacifica. 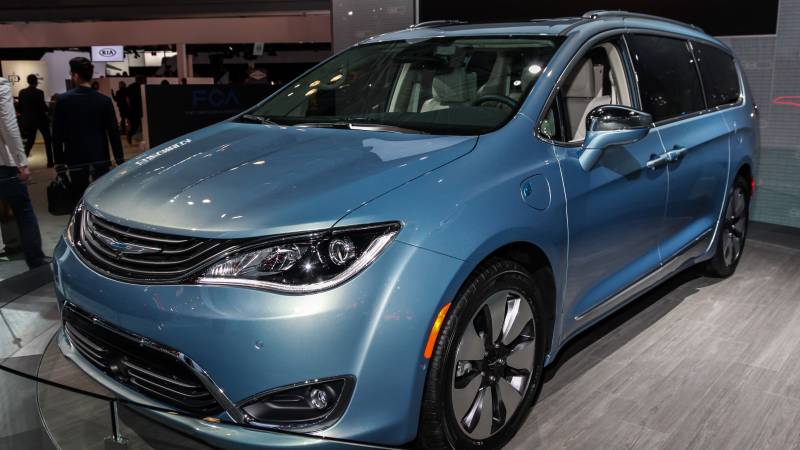