Inside the New Chevy Malibu

In its very crowded class, you can bet the 2017 Chevy Malibu has to work hard to be noticed. Chevrolet is certainly making it competitive. You’ll find a wide variety of tech standards and options that make the Malibu look more advanced than some of its competitors. Although other brands are more trusted, such as Toyota and Honda, there’s evidence that Chevrolet can hold its own.

The first thing that springs to mind with Chevy is not durability. That’s a problem for the Malibu, which is up against behemoth competitors like the Toyota Camry and Honda Accord. Those brands have long established reputations for longevity and quality. What’s a Chevy to do?

Well, it helps that the Malibu has earned a Most Dependable Midsized Car award from JD Power. While the award is fairly recent, the data goes back to 2013 models. That may be enough reassurance for many shoppers to give the Malibu a second look.

The 2017 Chevy Malibu has a spacious cabin that can seat five. Adults will feel okay in the backseat, but they’ll wish they’d called the front seat. That’s just how it is in a midsized sedan.

The L base features are downright disappointing. That makes the LS a more logical starting point. With that, you get push button start, heated side mirrors, and laminated front/side windows. Next up the ladder, the 1LT adds a power driver’s chair and ambient lighting, but you’ll have to jump to the Premier to find luxury options worth talking about. This includes:

The 1.3-liter Ecotec engine earns 27 mpg city and 36 mpg highway. That’s the standard engine, and it’s beating the standard Camry and Accord engines by several mpg in both categories. Chevy also has a stop-start system that reduces fuel use in the city even more.

For drivers, the real test is performance. The Malibu engine generates 160 horsepower and 184 lb.-ft. of torque. You can compare that to the 178-horsepower Camry or the 185-horsepower Accord. You really have to drive these cars to decide if there’s a difference because turbos often match their counterparts thanks to high torque rates.

Sports-minded drivers will gravitate toward the V-6. This 2-liter turbo EcoTec generates 250 horsepower. It’s harnessed to a nine-speed automatic transmission. In this case, the V-6 generates less horsepower than the Camry’s V-6 or the Accord’s V-6, but the torque rate is higher. These contradictions make it tricky to decide which car is right for you without test driving all of them. Then there’s the 2017 Chevy Malibu Hybrid with its 49 mpg city fuel economy. It earns 43 mpg highway. The Camry Hybrid (42 mpg city/38 mpg highway) can’t match that.

When it comes to connectivity, the Malibu is definitely trying harder to impress. For several years now, it has been the only one in its class to offer Wi-Fi capability on every edition. You can thank OnStar for that. Frankly, there are many affordable midsized sedans that either don’t offer it, or the brand holds it back for the priciest models. This makes the Malibu look really good to those who can imagine the kids in the backseat playing quietly on their iPads.

When it comes to dash tech, L base features are limited to a radio. Most buyers will just move up the ladder to the LS. That nets you a seven-inch touchscreen, Chevy MyLink connectivity features, a rearview camera, and a USB port. Even better, you get Android Auto and Apple CarPlay. You won’t find those two on the Toyota Camry at any price. The eight-inch touchscreen adds another USB port and more voice-activated features. On the Premier edition, there’s a premium audio system and a wireless charger.

The Malibu really does try harder. This car has earned the top safety scores, and there’s also a Top Safety Pick Plus Award on its shelf. It has ten airbags, beating most competitors. ECM grade braking control, a Chevy exclusive, makes hill travel safer. Crash avoidance features are available that you may not get on rival vehicles. You’ve got to pay for either the 1LT or the pricey Premier and then pay extra on top of that. Contrast that with Honda. The automaker has made a point of making many of these systems available as an option on every Accord edition. Still, this is a comprehensive list with slightly more than you’ll find on the Hyundai Sonata, Toyota Camry, Honda Accord, and many other competitors. Here’s what you can get:

When looking at the pricing for the 2017 Chevy Malibu, you’ll find that trim levels don’t match up with competitors, and you’ll have to do some math to decide whether you are getting your money’s worth. You probably don’t want the L, and that’s why the more comfortable LS is also listed here. You’ll notice that the Malibu is no longer cheaper than the Camry when you make that leap. While the Accord seems less expensive, that’s the price for the manual transmission, and most drivers will opt for the automatic. By the time you pay for crash avoidance features on the Malibu Premier, you may hit the top price for the Accord.

If operating costs are based on fuel economy, you can be sure that you’ll get paid back at the pump with the Malibu’s EcoTec engine. Even the V-6 is extremely efficient, earning 22 mpg city/33 mpg highway. Chevy also offers a five-year roadside assistance plan, beating Honda by two years and Toyota by three years. The Hyundai Sonata matches that and has longer overall warranties. Insurance costs vary, but it helps to buy a car with a five-star federal crash rating. The Malibu has that covered.

With so many midsized competitors, it is hard to say if the 2017 Chevy Malibu is the one that will make you happy. If dash tech, safety tech, and fuel economy are priorities, the Malibu definitely deserves a second look. 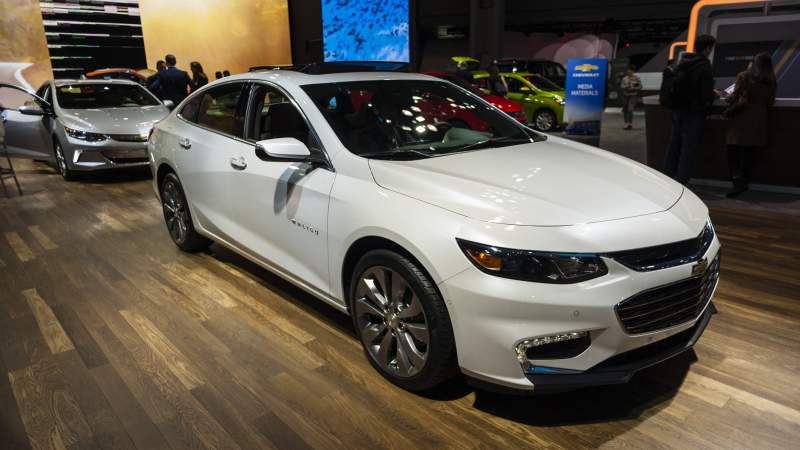