Inside the New Cadillac Escalade

If you want to draw more attention on the road and you have big bucks to spend, Cadillac has got you covered.

The 2017 Cadillac Escalade is turning heads like never before. The bevel-edged styling, luxury fittings and cavernous cargo space are giving its rivals a run for their money. From its unmistakable silhouette to its capabilities, this latest effort from General Motors Co. is better than ever. It bears little resemblance to its cousin the Suburban.

Don’t let the different versions confuse you. Whether you wind up in the Luxury, Premium Luxury or Platinum model all depends on how crazy you go on luxury options.

For size and trim, the Escalade gets high marks both inside and out.

Given the sculpted, posh interior design, you can momentarily forget that you’re in an SUV and not a limo or private jet. The suede accents and ultra-padded seat cushions make drivers and passengers feel truly pampered.

The vehicle seats eight passengers comfortably. Front seats that cool or heat at the touch of a button are standard. Middle and rear seating can be folded flat, and the cargo floor is waist-high for convenient loading and unloading of items. Behind the rearmost seats on the standard model, you’ve got 15 cubic feet to play with; opt for the Escalade ESV, and you’ll get double that.

There is ample storage for life’s little necessities. Your laptop or tablet computer is safe in the roomy center console – which boasts a cooling compartment – and pockets for small items like phones and pens abound. You won’t have to look too far for a drink holder.

This Escalade could have a smoother ride, but the 8-speed automatic transmission helps. Quality was further improved upon in the 2017 model. The truck chassis and suspension are still separate, but special magnetic dampers were added to make the adjustment from “Tour” to “Sport” modes less abrupt.

The 6.2-liter V-8 engine will get you to 60 mph in five or six seconds. Some rivals only offer that kind of power thrust as an upgrade. For an SUV, it’s exceptionally fast, capable of 112 mph at top speed.

Other performance features include all-wheel or rear-wheel drive. That’s the only performance decision buyers have to make, but overall, the Escalade is a good vehicle for driving on rough terrains or in inclement weather. The solid rear axle is a rare thing in luxury SUVs. Its towing capability is a whopping 8,300 pounds.

As for safety features, an additional airbag would keep the driver and front-seat passenger from colliding in the event of impact from the side. Depending on which version you buy, automatic emergency braking, automatic seat belt tightening, adaptive cruise control and lane-departure warning systems are available. The latter automatically turns on the high beams and eases the vehicle back into its own lane. The rearview mirror has been replaced with a high-resolution screen. This allows for an unobstructed view of whatever the tailgate camera picks up in your blind spot or behind you.

Many other options that prevent collision are offered.

Don’t worry if your parallel-parking skills are less than ideal. The Escalade uses radar and cameras to get the job done with no help from you.

Not surprisingly, the Escalade is highly prized by car thieves. GM responded by adding more security features. If glass breaks or if the vehicle is loaded onto a tow truck, the alarm sounds. The system prevents the SUV from starting or moving.

Interior technology is nothing short of genius. The information and entertainment system is touch screen, but it can also be activated by speaking or making swiping gestures. Drivers have four options for configuring digital information. The results are displayed on a 12.3-inch screen or projected onto the windshield for heads-up viewing. All the dashboard controls have been improved for quicker response times.

Cadillac’s CUE information and entertainment system is standard on all Escalades, and the upgrades from previous models are impressive. Base features include satellite radio, Android Auto, Bluetooth connectivity, OnStar navigation with 4G Long-Term Evolution connectivity and Bose audio. Just about any device can be recharged in the center console. Backseat Blu-ray or DVD systems are optional depending on the trim selected.

The Escalade, priced at almost $74,000 before any options are added, is considerably pricier than some of its competitors:

The Escalade stacks up favorably overall. It even bests some of its rivals in toughness and fuel efficiency.

Detractors, however, are miffed about the outrageous costs for extra options. Just one or two additions can easily bump the final price into six figures, and some of the same features on competitors’ models are standard. They also find the Escalade cumbersome and hard to manage on curvy roads. Range Rover and Mercedes-Benz have managed to top GM for smooth handling and overall drivability.

In the end, it all boils down to personal preference. The Escalade descends from a long line of well-made, dependable trucks. Some drivers like their trucks gussied up and are quite willing to pay for extra luxuries.

Base features like cylinder shutoff and direct injection keep the Escalade competitive as far as fuel efficiency goes, and it rates a combined 22 mph. The cylinder deactivation turns off half the engine when it’s not needed. Some aluminum construction keeps the weight down, and aerodynamics at high speeds is improved with grille shutters that close automatically.

No one can argue that the Escalade is an exceptionally sleek, good-looking ride. The engine, horsepower and towing capability can’t be faulted. Fans appreciate the comfortable seating and versatility of the spacious cargo area. State-of-the-art technology keeps passengers informed, safe and even entertained. Rivals haven’t surpassed GM in those respects.

The only real drawbacks to the Escalade’s performance on the road are its somewhat rough ride and less-than-optimal performance on curves and sharp turns.

The thing that critics are most vocal about is the steep sticker price for an SUV, especially considering how quickly options add up. They are eager to point out that the Escalade is nothing more than a Chevy Suburban in more ostentatious clothing. 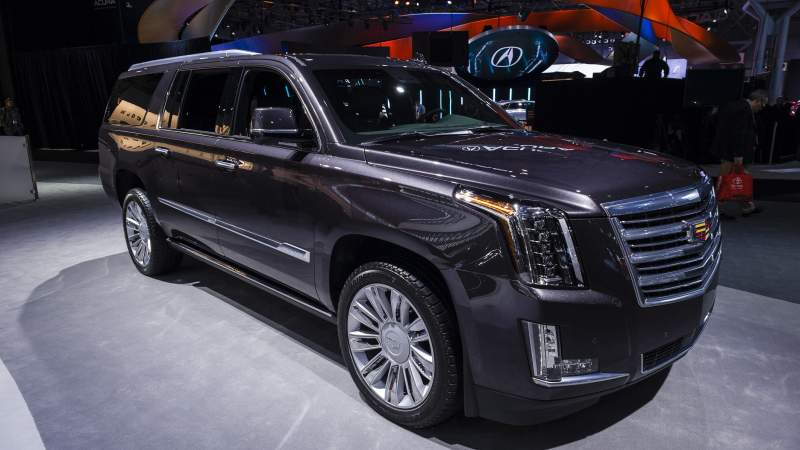