The 2017 Ford Edge is a highly rated midsize SUV boasting exceptional safety scores, a spacious interior, and several powerful engine options that take it a level beyond the common family crossover.

It’s available in four trim levels: the SE, SEL, Titanium, and Sport. The Edge was named the best two-row SUV for families by U.S. News and World Report, and is a finalist in the publication’s best two-row SUV for the money category. It’s also named a “crossover worth considering” by lauded industry publication Car and Driver and boasts a five-star overall customer review on Cars.com.

With room for 5 passengers and a starting MSRP of $28, 950, read on to learn more about the 2017 Ford Edge if you’re shopping for a new SUV this year.

The standard engine for the Ford Edge is a twin-turbo 2.0-liter engine that produces 245 horsepower. If you opt for the SEL or Titanium trim, you can choose to upgrade to a 280-horsepower, 3.5-liter V6. The fully loaded Sports model is equipped with a twin-turbo 2.7-liter V6 that produces 315 horsepower. All three 2017 Ford Edge engines are paired with a six-speed automatic transmission. The Sport comes standard with all-wheel drive, which is an available option for the other trims. The rest come standard with front-wheel drive.

In addition to the Edge’s substantial power and strong acceleration, fans of this SUV praise the smooth, sedan-like handling, with firm steering that prevents the body roll movements that happen in this type of vehicle.

The Edge is one of the highest-rated midsize SUVs in crash tests, earning a five-star overall safety rating from the National Highway and Traffic Safety Institute, and the highest rating in four out of five crash tests from the Insurance Institute on Highway Safety.

Parents will especially appreciate the MyKey system, provided in all 2017 Edge models. With this technology, each driver has a specific key fob that can limit top speed and radio volume when teens use the car, as well as provide additional safety alerts.

The 2017 Edge also knows how to have fun as it’s built to impress with a wide range of high-tech features, even in the base model. The SE trim comes standard with both Bluetooth and USB connectivity, four 12-volt charging outlets (in a class where many competitors come with just one), proximity key, and rearview camera. The SYNC infotainment system offers easy access to apps like Pandora and iHeartRadio, while the upgraded SYNC3 system in the Titanium trim level and above allows you to connect your smartphone directly with either Apple CarPlay or Android Auto. Voice commands can be used for both incarnations of Ford’s infotainment system, another boon for safety.

Upgrading to a higher trim level gets you even more luxury features, such as dual-zone automatic climate control, navigation, a 12-speaker Sony audio system with integrated satellite radio, ambient lighting, hands-free liftgate for easy cargo loading, heated steering wheel, a 110-volt charging outlet, and a panoramic moonroof. Another notable feature for families with children is the rear entertainment system, which features a DVD player and dual headrest-mounted screens.

A key competitor of the 2017 Ford Edge is the 2017 Nissan Murano. Though the Murano is also an excellent crossover in many respects, it falls short of the Edge when it comes to passenger space and safety scores. The Edge also has better handling and more engine options than the Murano; however, the latter has a standard V6 with slightly better fuel economy than the optional V6 of the 2017 Edge.

Another popular midsize crossover, the Kia Sorento, receives slightly lower ratings than the Edge for the same shortcomings displayed by the Murano. However, the Sorento’s lower starting price for similar features makes it a popular choice for more budget-conscious car buyers.

Although the above-average safety scores are a key selling point of the 2017 Edge, both the Kia Sorento and GMC Acadia score better in crash tests. However, the Ford bests both the Honda Pilot and Toyota Highlander in this category, two manufacturers that are often lauded for their safety initiatives.

The 2017 Ford Edge is one of the better bets among midsize SUVs for fuel economy. If you opt for the base engine, you’ll enjoy an EPA-estimated 21 city/29 highway miles per gallon. Choosing the available stop-start fuel saving feature upgrades that to 22 city/29 highway mpg. If you opt for an Edge with one of the two V6 engines, fuel economy is lower: 17 mpg city for both, with 26 mpg highway for the 3.5-liter engine and 24 mpg for the Sport’s 2.7-liter V6.

One of the most frequently mentioned pros of the 2017 Ford Edge is the expansive interior, large enough to fit both children and tall adults comfortably. The second row has ample head and leg space as well as reclining seats. Reviewers love the Edge’s high-class interior, featuring luxurious soft-touch materials reminiscent of those in a much more expensive vehicle. Cargo space is above average for the class at 39.2 cubic feet behind the second-row seats, and 73.4 cubic feet with the seats folded down.

While the 2017 Ford Edge has average predicted reliability according to research by J.D. Power and Associates, the Nissan Murano and Toyota Highlander both score higher when it comes to long-term cost of ownership. Both the Kia Sorento and Hyundai Santa Fe offer better warranties than the three-year/36,000-mile warranty and a five-year/60,000-mile powertrain warranty provided with a new Edge.

In addition, other cars in this class are more generous when it comes to standard safety features. Purchasing the options packages required to add driver assistance gets expensive with the Edge, while SUVs such as the Toyota Highlander include these features even in the base models.

Despite these, however, the Ford Edge is an excellent choice for families who want plenty of space without opting for a larger three-row SUV or minivan. The 2017 Edge offers an optimal combination of space, performance, features, and value. The conservative, yet sophisticated styling is ideal for buyers who aren’t looking for the rugged, truck-like appearance of other SUVs in this class. 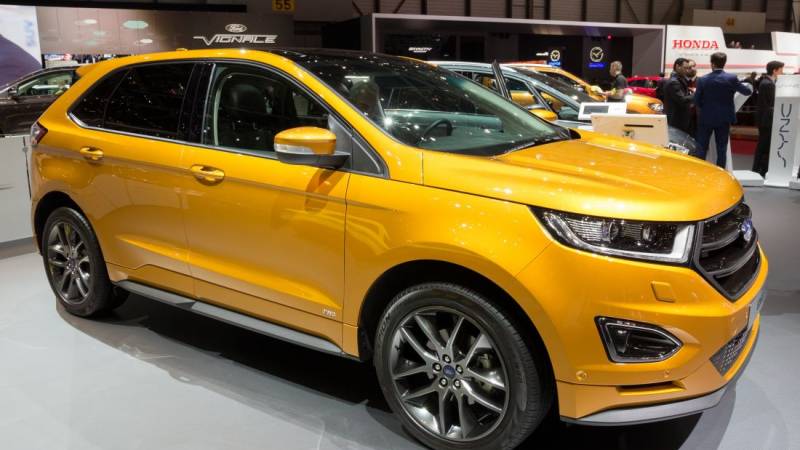