The 2017 Volvo XC90 is a luxury SUV with a combination of subtlety and strength. This suave SUV is perfect for those seeking everyday elegance. Here’s why you’ll love the newest Volvo XC90.

This ergonomic and easy-to-operate vehicle displays a modesty that belies its many high points. The luxury can be found in the interior with high-quality materials and intuitive systems. The completely modern and updated XC90 just received its first redesign this year since 2002 with the result of a refreshing counterpoint to the more rigid designs offered by Mercedes and BMW.

While the fluid lines of the 2017 XC90 instantly define it as a Volvo, they also disguise the true size of the vehicle. Would you believe that it seats seven comfortably? One Volvo executive mentioned that the vehicle is suitable for those who do not wish to be defined by a specific brand.

Once you open the doors, you will be pleasantly shocked at the beautiful and spacious interior. A refreshing leather scent will greet you from the superbly comfortable seats. Stitched leather, textured metal and matte wood are layered throughout the vehicle in manner evocative of Scandinavian furnishings.

The bulk of the XC90 can be found in the base T6 Momentum model with a 316-horsepower turbocharged and supercharged 2.0L, four-cylinder engine. Combined with an eight-speed automatic transmission, there is no reason why you should not enjoy the ride. All-wheel drive is available for all trim levels. The turbo engine has a fuel economy of 22 mpg, an excellent rating for a large luxury SUV. Upgrades to the T6 Momentum include the Momentum Plus, the sporty R-Design, Vision, Convenience, Climate, Rugged Luxury and Urban Luxury.

The T8 model will feature a hybrid engine. All-wheel drive is replaced with a 60-watt, 82-horsepower electric motor on the rear axle. This arrangement allows the vehicle to run on the gasoline engine, the electric motor or a combination of both. The European range rating is listed at 25 miles on electricity alone, but U.S. ratings are most likely closer to 20. As far as price goes, the XC90 T8 is the most expensive. However, it is also the quickest with approximately 400 horsepower and an outstanding 472 pound-feet of torque.

The XC90 is the only plug-in hybrid seven-seater available on the market. With minimal carry-over from previous models, the 2017 XC90 is one of the very few cars that can truly bear the title of all-new.

Among the many redesigned items are the front seats. With multiple planes of adjustment, they are supremely comfortable and have few rivals in the automotive world. The second-row seats slide backward and forward to accommodate long-legged adults. The third row seats are large enough for adults as well if they are willing to split the difference with those in the second row. Due to theater-style seating, each row is slightly higher than the one in front of it. This seating style helps ensure that everyone in the vehicle has excellent outward vision aided by the large windows and the gigantic panoramic (standard) sunroof.

The original 2002 XC90 was the first SUV to demonstrate that crossover utility vehicles could include all the safety features of a passenger vehicle with the addition of new ones such as roll-over detection and prevention. The predecessor of this vehicle easily passed the frontal crash test which was added a full decade after the XC90 launched. The relentless focus on engineering that Volvo demonstrates has been proven to protect occupants in crash tests and real-life tests. The NHTSA gave the 2017 XC90 a five-star overall safety rating.

The passenger-protection structure consists of various types of high-strength steel. Frontal members include high-strength steel for improved weight distribution. Seven airbags are included as standard along with the usual traction/stability control systems and anti-lock brakes. The battery for the T8 hybrid model is located within the tunnel between the front seats for ultimate protection during collisions.

The XC90 also has two unique features never before used in the automotive world: run-off-road design and automatic braking at intersections. Run-off-road design offers protection against the forces experienced when a vehicle leaves the road and lands in a ditch or another surface. The front passenger seats took seven years to create and include a crushable member that helps to absorb some of the shock of a hard landing. The seatbelts also tighten to hold the occupants in place during a collision.

Automatic braking at intersections slows or stops a vehicle if another car enters its path from oncoming or side traffic. Automatic braking is standard with the City Safety package along with lane departure warning and the Road Sign Information system designed to help prevent speeding.

Other safety systems include Pedestrian and Cyclist Detection (fully functional in daylight and nighttime conditions), Park Assist Pilot (automatic parking for parallel and perpendicular parking) and Rear Collision Warning (to prevent and/or decrease the effects of a rear collision).

Test drivers state that the new XC90 has a smooth responsive transmission and ample power. The hybrid model has even more power. Steering is quick and clean with excellent road feedback. The brakes are strong and responsive on both the gas-powered and hybrid models.

Competition for the Volvo XC90 includes the 2017 Audi Q7, the BMW X5, the five-seat Mercedes GLE, the Acura MDX and the Infiniti QX60. The Q7, the GLE and the X5 are all expected to feature a plug-in hybrid option in their lineup. The Infiniti QX60 includes carefully chosen luxury features, but the CVT is lower quality than other competitors of the XC90. The seven-seat Acura MDX has gone strong in the quasi-luxury world for many years and tends to cost slightly less than its competitors. 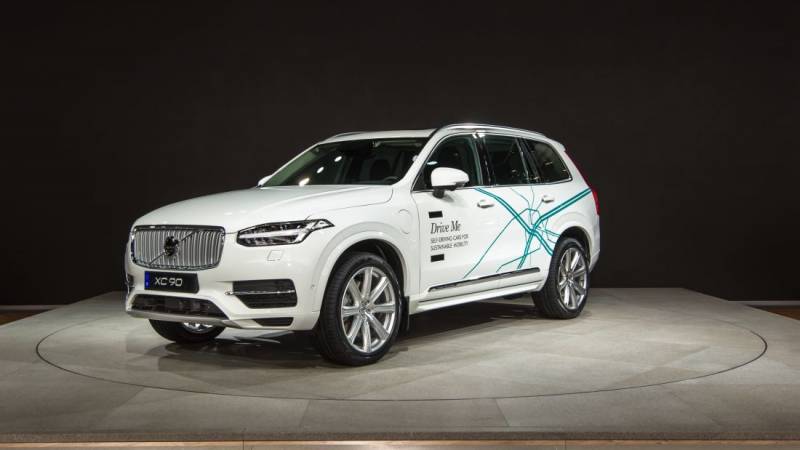